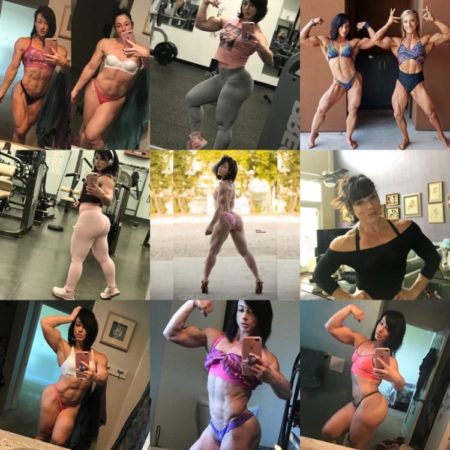 Featured in this image are the top nine most liked images from my Instagram account in 2018. Funny. The story I submitted for my graduate school program was entitled, “My Nine.” It was going nowhere. Literally. The first-person narrator was a woman stuck in rush hour, stuck inside her head, stuck inside her dysfunctional past. The words, the sentences, the paragraphs were written well, but the story moved like a stuck escalator. All the steps but no motor to push the character forward.

I felt stuck when I began this year. With one leg in muck, sucking me in. My energy plucked like feathers pulled from a bird’s wings. I once watched a butterfly dance around on the ground, wings fluttering, flapping. But the butterfly did not fly. It just twirled in circles. Round and round. I thought back on Chris Cornell’s suicide in 2017 and saw the singer in that butterfly. Such beautiful wings, but what’s the use when you have no will or are too ill to fly?

I don’t want my career to be in fitness. I want to help people in this industry for the sake of helping people to step out of the sticky confines of their cocoons, to make use of their wings and learn to fly. I want this to be supplemental income, not a dependency for my livelihood. Between that desire and my intense realization that if I were to die suddenly, my sole regret would be not taking advantage of my writing talents, I forced myself in 2017 to apply to graduate school. Only one of the three schools accepted me. Lucky for me, that school was my first choice.

I was later told by the director of the program that they saw qualities in my writing that just cannot be taught. The drawbacks to my short story submission were easy fixes, they felt. One year later, my second-semester professor wrote this in his final assessment of my writing: “Jodi is a strong writer whose work has that elusive thing that so many other writers’ work lacks: a vision. . . . Jodi’s stories often have a voice hovering on the periphery, observing, as well as being inside the character’s head. This is a difficult thing to do: being two places at once. Yates did it. Fitzgerald did it. It’s a promising sign when I see it in someone who’s early on in their writing career.” My writing itself is not the problem. I am. I clip my own wings, stop my own motor. With my fear.

My biggest fear occurred this year when the most important being in my world died. And my motor died. But just like an escalator can still technically be used, step by step, a person creating her own motion rather than relying on a hidden conveyor belt to ease her up or down to different floors of her destination, I still moved step by step through goals and tasks that I had set forth for myself in 2018. I finished my first full year of graduate school. I competed in two IFBB Pro shows, improving as time went on and earning a medal in the second one.  My grief gnawed on me, but I don’t want to remain on the ground, so even though pieces of me are missing, I still am finding a way to move forward.

That’s what a new year means to me. It’s not a do over. It’s not a fresh start. It’s another day. Another day in my life. Another day to move forward. The past doesn’t disappear. The past makes me who I am. It shapes my choices and sharpens my words. I wouldn’t wipe away 2018. Obliterating the past is like tearing out the whole, broken, escalator when all that needs to occur is a few fixes to the motor. Without the escalator, getting to a different floor becomes that much more difficult. And our journeys are already arduous enough without us destroying the links between our yesteryears and our tomorrows.

I do not know what 2019 has in store for me. I think I’ve written about my fear of the unknown in a previous blog post. It is the thing that wreaks the most havoc on my nervous system when I am preparing for a show. I do not know how that day will go, that day that I will appear on a stage, get judged, and receive a verdict. But that’s how life is. And that’s how writing fiction should be. I should not quite know what my characters will do until we are all in the moment of them doing those deeds. Yes, “we.” I need to shut off my analytical, “need to know now” portion of my brain and instead trust my imagination to drive everyone forward. So I guess that is my resolution: pack my past with acceptance, trust my intuition, and step forward no matter the motor or motive.